“You’re taking something that’s perfect and trying to make it more perfect” said my friend Kelly.  I was trying to convince her that the mini pies she took home a couple of weeks ago were some of my worst – a chocolate pudding pie experiment gone wrong.

And she got me thinking – is there such thing as perfect pie?  Pie elicits such an emotional response in people.  It takes them back to memories of a slice of time when the world was right.  The feelings captured in that memory infuse the taste of the pie they remember, making it nothing short of perfect.  For me, it’s sitting at my Grandmother’s kitchen table eating strawberry rhubarb pie.  In my memory, the pie was amazing and something I would never be able to replicate.  Then I made it and you know what – the crust was awful.  It was a strange recipe that made a soft, cake like crust that was bland and tasteless.  And there were no actual strawberries!  Just rhubarb with strawberry Jell-O.  That was surely not the pie I so fondly remembered, was it?  It was.

What made that pie perfect was our whole family crammed into my Grandparents’ tiny efficiency apartment.  Nowhere to sit but the kitchen table where a spread of pie, kiflis (Key-Fleas), muffins and cookies helped you pass the time until Grandpa took you down the hall to play pool or outside to play shuffleboard.  What made that pie perfect was my Grandmother who in her Hungarian tradition, fed us until we loaded back into our car for the two hour ride home, settling in against our pillows drenched in the smells of meat, potatoes and most importantly…pie.

I am aware that there is no such thing as perfect pie.  But I’m going to make MY perfect pie and I still have some work to do.  I went full steam ahead with a three-way dough experiment this week.

Technique:  by hand or food processor?

Fat:  All butter, combination of butter and shortening, AND will organic palm oil shortening make it better?

The variable in all of the recipes is the fat – the flour, salt and sugar are essentially the same and all the recipes were for one 9 inch pie crust. 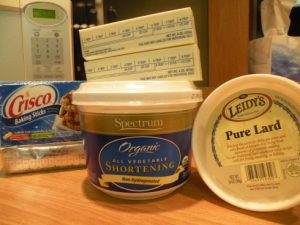 King Arthur (word has it this baking cookbook is a great tool to have.  It better be because it was $35).  King Arthur says that perfect pie crust is 1/4 cup shortening and 4 Tablespoons of butter.

Smitten Kitchen, the queen of food blogs.  I have an enormous respect for this blog and pretty much take what she says as law.  Deb says that perfect pie crust is 1 stick of butter – just butter.  Her theory is that once you are skilled at making dough, the type of fat does not matter.

Me.  My recipe for a shortening/butter crust has received rave reviews. But I want to try an organic pure palm oil shortening to lessen my guilt for feeding those I love solid vegetable oil.  My perfect crust is 1/3 cup shortening and 6 Tablespoons of butter.  More fat than King Arthur and not pure butter like SK.

Pie crust tutorials are starting to make me feel schizophrenic.  Some depict leaving the chunks of fat a little larger so that you get the pockets of flakiness.  But some tell you to cut in the fat to the consistency of coarse cornmeal.   So, I decided to listen to the King and left all of my chunks a little larger for the by hand experiment. 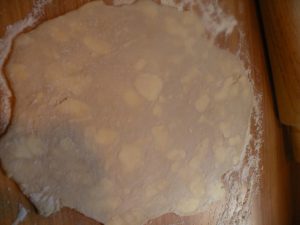 I made my mini pies, placing each recipe in it’s own row.  As I watched them cook through the oven window, I knew where I was heading… FAIL.  Those chunks turned to a pool of butter. 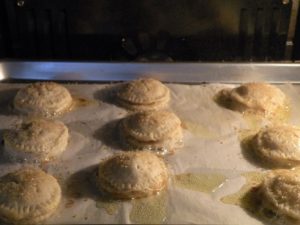 I asked Deb from SK to give me some feedback on my inability to get this all butter crust under my belt.  She told me that I needed to make the chunks much smaller.  So, out came the food processor for round two.  I know, I know, a true piemaker can do this by hand, but I really like using a food processor.  I made the all butter crust and my crust again with MUCH better results! 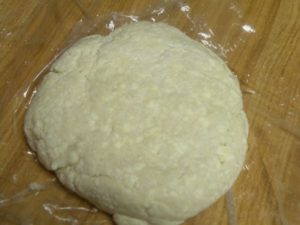 The all butter mini pies cooked up nice and crisp – not nearly the pool of butter that they had once been in.  They were tall and flaky, too!  And I cannot deny that the taste was rich and buttery.

But they still did not have the long layers of flake and tenderness that my combination recipe seems to produce.  Maybe it’s my technique, or maybe it’s just my own personal memory of what’s perfect.  I’m going to keep trying to convert to an all butter believer, but after making dough 7 times during this experiment, I’m landing back at my own recipe with the tweak of replacing Crisco with Spectrum palm oil shortening (I liked it a lot better – no aftertaste).

Conclusion:  It was the pair of fats, in the kitchen with the food processor.

Now that I have that out of my system, I can’t wait for my line up of recipes this weekend.  Stay tuned!