You know your life has turned a corner when upon visiting a new city, you embark on a pie crawl and not a bar crawl like a more youthful and resilient version of yourself might have say, oh, 15 years ago.  My how time has changed me – those rounds of cherry bombs and appletinis have now turned into slices of cherry pies and apple pies.

I haven’t gone anywhere interesting since I started this blog until recently when my husband and I went to Nashville, Tennessee.  The plane had barely dropped its landing gear and I was already formulating my plan of attack to find the best pie in Nashville.  And find Ben Folds.  But the pie would be easier.  By the time we went to bed that first night, I had mapped out the top three pie stops and was eager to experience all Nashville had to offer. 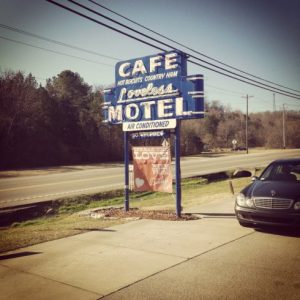 No lack of love here for this throwback motel turned cafe destination.  The Loveless Cafe lived up to all the hype – especially their secret recipe biscuits.  Before I get to the pie, let me just tell you that I had (vegetarian/vegan friends cover your eyes) the most amazing pulled pork omelet for breakfast.  Never in my life would I have put the two together, but man was it good.  I will say that my excitement for this meal was definitely influenced by the red gingham tablecloth, the server with a thick southern accent and the smoker wafting smells of slow cooked meat.  I was gettin’ all Sweet Home Alabama and eating any and all suggestions to feel authentically Southern.

With a belly full of barbequed pork and the clock just having reached 10am, there was no turning back.  Bring on the pie.  So we ordered up an apple pie and a peanut butter pie for the table.  I drilled our server on the quality of the pies.  Homemade crust?  Check.  Fresh filling NOT from a can?  Check.  Do you make the best pie in Nashville?  Check.  We’ll see about that.

The verdict:  Not a total letdown, but nothing to write home about. 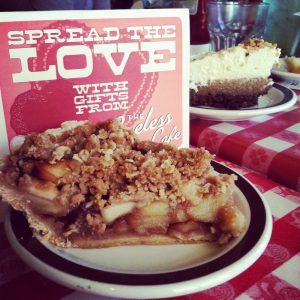 To my surprise, the crust had body and a nice snap when you took a bite.  No soggy bottom which was a huge win.  The apples were crisp, but the spices and texture of the filling were a bit of a miss – kind of tasted like the refrigerator.  I think the Loveless cafe should stick to smokin’ their meat and baking their biscuits.  Look, you can’t be good at everything. 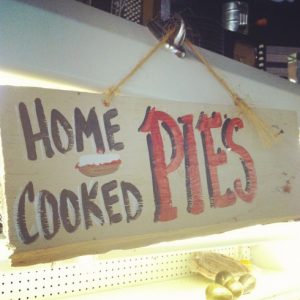 They had me at the sign.  What’s not to love about an invitation for home cooked pies?  Puckett’s is a neighborhood favorite and I can see why.  With an eclectic atmosphere of mismatched tables and chairs, a grocery and a full scale restaurant, anyone can find a home at Puckett’s.  Word has it that you can run across a country music star if you’re there on the right day.  It’s a place where friends come to catch up and families come to dine.  And our morning breakfast was no exception.  The locals made the tourists feel right at home and the food was fresh and delicious.  Except the pie.  I was on a high – the experience had been so good until I decided to take them up on their invitation for home cooked pies.  But despite my better judgement, I went ahead and tried a piece of cherry pie even after I saw the individual pieces lined up, covered in saran wrap in the display cooler. 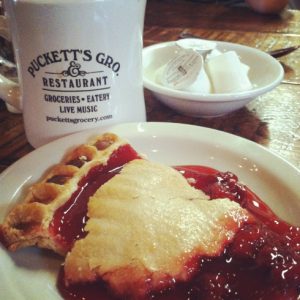 The verdict:  You should probably take pie off the menu.

Why do people claim to have great pie when it’s a mushy mess?  Have they never had a real, homemade pie that actually has a crisp crust and full-bodied filling?  How is that picture up there considered a pie?  I couldn’t even finish it.  The filling had to have come from a can and the crust was so soft, I could not distinguish it from the texture of the filling when I took a bite.  Puckett’s, I loved your food and would go back, but your pie sign is false advertising! 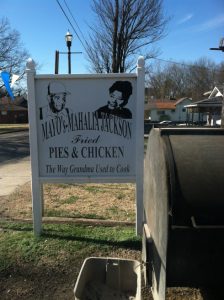 Who knew that a little yellow drive-through trailer on Jefferson Ave. would hold the biggest surprise of our whole trip – THE BEST PIE IN NASHVILLE!

We pulled in and it was love at first sight.  The smell of the smoker filled the car as we rolled our window down to order.  Mr. Dolla was already outside starting the day’s fried chicken and smoked pork.  Inside, they were making our peach and sweet potato fried pies to order.

A few minutes later, we were handed a brown paper bag, warm with fresh fried pies and we drove on our way.  If you like the pies at McDonalds, these will rock your world.  The fillings are made fresh, and each pie is made to order.  Both pies were good, but the sweet potato was by far my favorite.  The outside was crisp and golden and the filling boasted a perfectly balanced sweet potato flavor with a undercurrent of spice.  At only $.99 per pie, I could easily eat one every day if I lived there. 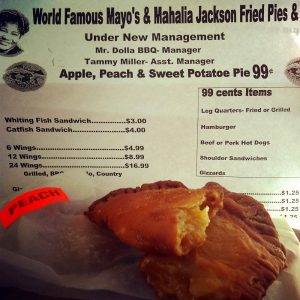 Verdict:  Mr. Dolla will make you holla for more pie.

This was it – the gem of Nashville.  Get yourself to Jefferson Avenue for some fried pie if you’re ever in the area.  And tell Mr. Dolla that I sent you!

Watch this short video about these iconic fried pies.

And as if finding the best pie in Nashville wasn’t enough, we topped our trip off with some serious karaoke on Broadway.  I was not going to pass up a chance to do my best Shania Twain in the heart of Nashville.  Yee-Haw! 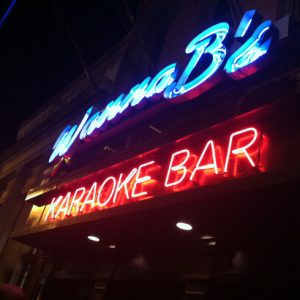 One thought on "Nashville Pie Crawl"