The story that follows is one that I wrote in my early months of learning to make pie about a visit with Mrs. Eason who made pie for President Obama.  In the months following that visit, I continued to stay in touch with Mrs. Eason.  Once, she called me and asked me to bring a pie to her upstairs neighbor, so I did.  During the holidays, I took her a tiny Christmas tree and we set it up on top of her TV next to her dancing trophies and decorated it with tiny bulbs from Drug Mart.  As time passed, she would call me for no reason.  Some nights I would answer my phone and just talk to her.  We would talk about the same thing – pie.  She would scold me for suggesting certain fillings would be tasty and tell me that her peach crisps were the best.  Pie, church, Mr. Eason, repeat for the next call.  We always ended with how Mr. Eason was doing, her husband who was in a nursing home.

As it always seems to happen, my good intentions to stay in touch with her were suffocated by work and kids and distance.  I thought about her all the time, but the phone calls became further apart and before I knew it a year had passed.  So had Mr. Eason.  I was heartbroken for her when I saw the obituary.  I made a mental note that I needed to get back in touch with her and print her the pictures we had taken when we went to see him.  And as it always seems to happen, my good intentions were once again drowned out by life.  Until it was too late and Mrs. Eason passed.

I was looking at her obituary tonight.  Survived only by a guardian.  I wish I had gone to her funeral.  I wish I understood that flying into someone’s life isn’t just a fun hobby.  That sometimes it’s interpreted as an offer of companionship and if I’m going to open that door, then I should follow through.  Offering kindness and gratitude is generally a good thing, but Mrs. Eason taught me that I should tend more closely to the relationships I cultivate if I want to stay on this path.

Out of respect for Mrs. Eason and her willingness to let me into her life, I invite you to hear her story. 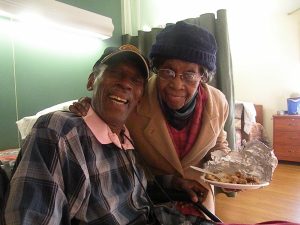 It was during my first year of learning to make pie that I read a newspaper article about a woman who was known to have the best sweet potato pie around. For years, Mrs. Eason had been baking for locally-owned restaurants throughout the city. Word spread about her pies and when the President of the United States came to town, he paid a visit to her apartment and proclaimed her pie to be the best he’d ever had.

A few months after reading her story, I decided to call her and ask if I could bring her a pie. Without any hesitation, she told me to come on over for a visit. Less than 24 hours later, I had whipped up a pie, packed up my boys and set out to meet my pie role-model.

I made my way to Mrs. Eason’s house, driving through Cleveland neighborhoods that had seen better days. Her white duplex donned bright green trim and the property was wrapped in a matching green chain link fence. Green spray-painted rocks lined the sidewalk helping to distract from the houses with boarded up windows, or no windows at all for that matter. The sign on her door read that the neighbors and police had declared this street a crime watch area, but I couldn’t help but wonder if she was safe.

We rang the bell and Mrs. Eason greeted us at the side door, ushering our clan up the steps and into her kitchen. As the door closed behind her – and before any words had been spoken – she swiftly grabbed one boy and devoured him in a hug. He disappeared into her pink-checkered skirt as she closed her eyes and seemed to breathe him in. Then she grabbed the other one and did the same. 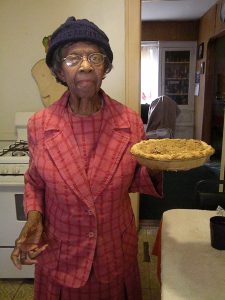 I placed my pie on her small kitchen table and began to nervously explain why I had come for a visit. My eyes darted around her tiny, tiny kitchen taking notice of an abundance of foil pie plates drying on a rack and a box of Lucky Charms on top of the refrigerator. 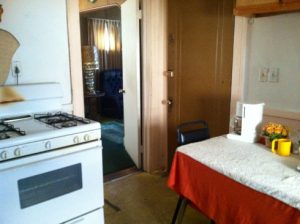 She told me that she just celebrated her 92nd birthday and had been making pie since she was a child in Alabama. Her recipe was her mother’s. Her mother’s recipe was her mother’s. It’s not written down. Mrs. Eason eagerly began to recount the story of her visit from President Barack Obama. She took me into her dining room and showed me the wall that proudly displayed the pictures. 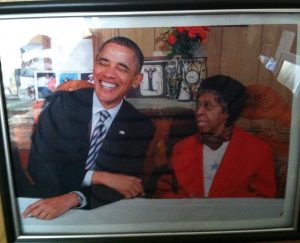 I noticed that a man in a wheelchair appeared  in most of the pictures. I asked Mrs. Eason if this was her husband, and she explained that he lived in a nursing home and that she only sees him when she can find a ride.

Ten minutes later we were in the car on our way to the nursing home.

Searching for topics to chat about during the car ride, I asked Mrs. Eason if she had family close by. As she twirled the button on her overcoat, she explained that she had two children, but they both had passed. When I asked her if this was recent, she responded, “No, they died inside of me. I never got pregnant again after that.” Tears sprang to my eyes as the sight of her hugging my boys so passionately came to mind. Here I was again, finding common ground with a most unexpected friend.

We arrived at the nursing home where we found Mr. Eason wheeling his way to play bingo. Mr. Eason didn’t miss a beat when he saw her face. “I was just thinking about you,” he beamed. She kissed him on the cheek and wheeled him to his room so we could visit.

Mr. Eason’s eyes projected an energy of adventure, fun and mischief. He served in the Marine Corps and was the leader of their drum corps. He keeps two sets of drumsticks among his personal belongings at the nursing home and has a small set of bongos to play his drum beats. 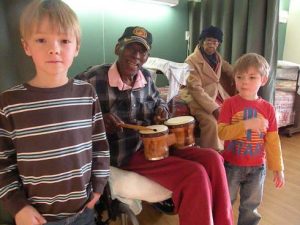 As we laughed and talked, details of an exciting, fun-filled life emerged. They met at a cabaret more than forty years ago – he jumped in her car and has been riding in it ever since. He was a championship boxer, having sparred in nearly 150 fights. However, their real love is dancing. They used to compete in ballroom dancing, and a multitude of trophies proudly adorn their living room. They’re in love and she’s waiting for him to come home. But they both know he won’t.

My visit to simply bring Mrs. Eason a pie evolved into a day-long immersion into her life. What I’m learning with this whole Pie it Forward idea is that it’s never about the pie. It’s about the people and what the gesture of pie uncovers.

Thank you Mrs. Eason for the hundreds, if not thousands, of slices of pie that have brought a smile to someone’s face (including the President’s), for inviting me into your life, trusting the kindness of strangers, and for demonstrating steadfast love as I reflect on my first decade of marriage. You deserve someone to make a pie for you. 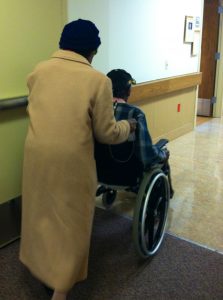 6 thoughts on "Pie it Forward: Mrs. Eason, Pie for the President"