I always have the best results when I don’t over think things. Take my hair, for instance. The days that I’m late, half-showered and furiously drying my hair to get out the door are usually the days that people tell me my hair looks good. “What did you do to your hair?” they will ask. And my answer is always the same – I have no idea.

On the other hand, the days that I plan and try really hard to do my hair tend to be a disaster. I learned this in a big way a couple of years ago. The night before I had an important meeting, I decided that my hair needed to be totally revamped. I was nervous about the meeting and my split ends were just not going to cut it (no pun intended). I decided to get a very last minute cut and ended up with a 7pm appointment at Fast Eddie’s Chop Shop (red flag #1). The night started out with promise – the place was edgy and the stylist’s name was Emily. She was new (red flag #2) and eager to style my hair. She washed my hair and started to cut. All of a sudden, the lights went out (red flag #3). The entire street blacked out and we couldn’t see a thing. I sat there, with a half-cut wet head praying for the lights to come back on. The emergency lights cast a blue glow across the studio as I watched the clock close in on 8pm. Word soon reached us that there had been an accident on a nearby street which had knocked out blocks of electricity.

I was in a mild state of panic, but Emily assured me that we could do this (red flag #4). By the glow of the emergency lights and a flashlight she continued to cut my hair. I went home with a wet head, tired and ready for bed (it was 10pm). Needless to say, I woke up the next morning, showered and dried my hair. It was awful. Just terrible. Uneven with a hint of a mullet. I was devastated, but had no option but to summon some confidence and go to my meeting. Then, I crawled back to my regular stylist and confessed that I cheated on her in the name of vanity and begged her to fix it. $80 later, my hair was short but at least the mullet was gone.

I keep learning this lesson time and again in various parts of my life. Over thinking and trying too hard cause me to lose perspective and get caught in the weeds. How many times do I need to learn to simply rely on my instinct and relax? I have no idea.

The point of this story? Apple Cherry Crumb Pie! When I make pie, I’m very focused. I read and re-read directions and over think everything. Recently, I had accomplished all of my planned pies and had one recipe of dough left. Not wanting it to go to waste, I started scouring my cupboards and fridge to see what I could come up with for a pie. I had 4 apples, one can of Oregon Sour Cherries and some oatmeal. Apple cherry pie with an oatmeal crumb topping! I chopped and stirred adding a dash of this and a sprinkle of that. Not a care in the world entered my mind as I effortlessly made this pie without following a recipe. What resulted was an amazing pie that everyone who had a piece said was my best one yet. “How did you do it?” they asked. I have no idea.

But, I’m going to recreate it and share it with you! 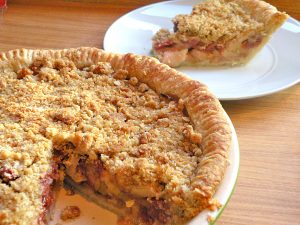