Things were heating up this past weekend – figuratively and literally. We came upon our first hot and humid day which also meant the first hot day in our new house without air conditioning.  It all sounded so manageable when we were buying the house in the crisp October air! The heat deterred me from making a proper pie and instead, inspired my favorite summer shortcut; a frozen strawberry yogurt pie.

On the kid scene, my oldest boy was spiraling down from his first broken heart and ending a two-month relationship that was the highlight of his fifth grade year. You heard me right – FIFTH GRADE. His mother (ahem, me) was also spiraling out of control having no idea how to appropriately manage this situation.

Here’s what you need to know about my oldest – he has been waiting his whole life to love somebody.  I have memories of him as early as four years old falling for little girls in preschool. In second grade, he asked if he could take flowers to a girl at school for her birthday. When he was little, he had a very uncomfortable crush on his second cousin which thankfully passed as he got older.  And in recent years, he has been hoping for a girlfriend with the same enthusiasm as he has been hoping for a BB gun from Santa.

And then it happened.  Through the magic of wingmen, a match was facilitated during running club and the best two months of his life began. He changed.  He brushed his hair in the morning. He was willing to put on something other than sweat pants. He was ready and out the door early, motivated of course by the chance to chat with her before school. He. Was. Happy.

Access to technology complicated my ability as a mother to just roll with this. He has an i-pad, so they began to text. And I began to invite myself into their chats to keep up on how this was unfolding.  It wasn’t long until the texting got complicated and the screen showcased a very grown up conversation of  “I love you” and other romantic feelings like “how did I get so lucky to have you” and “did I ever tell you how beautiful you are”. There were some proud moments in this like when she confided in him and he responded “is there anything I can do to make you feel more comfortable”?  THAT IS MY BOY!  Who says that?!  MY BOY!  But that moment was overshadowed by my panic of how to stop the train on the “good night babe” and “I love you”.

My friends reminded me that these are empty statements.  That a fifth grader has no idea what they are talking about and this is more for racking up social status and the ability to boast to your friends. Be that as it may, I knew that Elliot was really feeling this in his own way.

So we went to coffee. We have an agreement that when we need to talk about hard things, we go to coffee together (he drinks decaf of course). By putting him in an environment that makes him feel like I’m taking him seriously, he is more willing to open up and talk. And we needed to talk about this love business.

Love is funny like that.  The word is ours to use to describe any feelings that we decide fit the criteria for how we choose to love. Some of us use it sparingly and some of us are more generous with it.  Neither decision is wrong. It’s also important to remember that our understanding of love is never complete. My son is feeling love in the way his short eleven years of life experience allows him to. We’re all right in the moment with love, understanding it, needing it and using it the best way that we know how.  And we are all evolving with it, understanding it differently a decade from now than we do today.

So how did this all turn out?  She broke up with him on the last day of school to be single for the summer. And now he knows the other secret to love.  If you are brave enough to love someone, then you agree to have the courage to feel loss.  That is something I do know.

This pie has been in my life since I was young.  It was our summer pie.  My mother would make it with the fruit-on-the-bottom yogurt, cool whip and a store bought graham cracker crust.  No judgement if you want to do that – it’s delicious (2 containers of yogurt, a container of cool whip, mix and dump). I of course had to go mess it up with a homemade crust, plain yogurt, real fruit and fresh whipped cream.  This is a great pie to have on hand for guests or for an ice cream replacement.  We have two in our freezer at any given time during the summer! 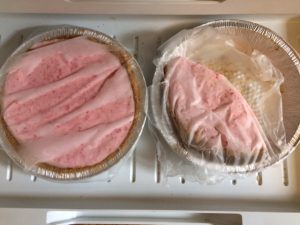 This is perfect for strawberry season, but you can swap in any fruit – peaches and blueberries would be delicious!  Enjoy! 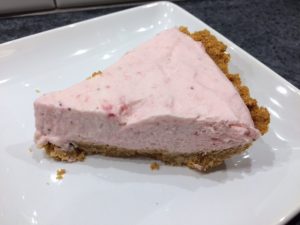