What better to commemorate National Pie Day then a big, deep-dish, double-crust, packed to the brim, all-American apple pie? And a darn right perfect one at that! Yep, let’s just skip to the end – I did it and it was awesome.

Week after week, I sit here behind my keyboard and espouse my latest pietifications. I’ve conquered fruit pies, lattice crusts, mini pies and butter crusts. Cream pies and custard pies – shoot, they ain’t got nothin’ on me. Crimped edges? Crispy bottom crust? Bring it. But there is one pie I have steered clear of. One pie that threatens to topple all of the pie skills I have acquired over this past year. The one, the only… DOUBLE CRUST APPLE PIE. As if getting one crust right isn’t hard enough, this monstrosity demands perfection on the top and bottom! I haven’t had the courage to take it on until now. But a pie holiday calls for the most serious pie I can make.

This recipe is the collision of Grandma Ople’s tried and true and the America’s Test Kitchen 2006 scientific experiment. I figured old school meets new school would be a good mash up. Grandma Ople’s Apple Pie is one of the highest rated on Allrecipes.com. If you know me, then you know that I swear by the four and five star recipes on that site. On the rare occasion that I cook, you can pretty much bet that I found it on Allrecipes. I also LOVE America’s Test Kitchen because really, why do your own experimenting when someone has already done it for you?

From Grandma Ople, I adopted her technique of making a caramel sauce to toss with the apples instead of the usual sugar/brown sugar mixture. I also adopted the suggestion of saving some of that sauce and brushing the top crust with it. America’s Test Kitchen confirmed what I had begun to notice about apple pie – cooking the apples first ensures that they don’t shrink away from the top crust and that you minimize the moisture that threatens to make your bottom crust soggy. Voila – my perfect apple pie! 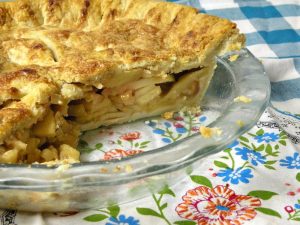 Apple pie is best in its simplest form without too much fuss. But the addition of a light caramel sauce to this pie enhances the pie just ever so slightly and makes it one of the best I've ever made.