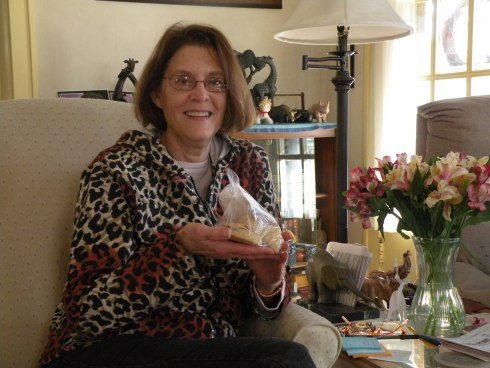 We all have one.  That favorite teacher who you still think about even though you’re decades removed from their classroom.  The one whose example you call upon when giving your husband (who is a teacher) a pep talk that someday one of his students will be talking about him.  Good teachers get under your skin and their influence travels with you for a lifetime.  Since I was heading to my hometown this weekend, I decided to bring Pie it Forward to my roots and pass the pie love on to one of my favorite teachers, Ms. Tabor.

I wouldn’t have her until Sophomore English, but Ms. Tabor was one of those legends that the older kids pass along as soon as you enter high school.  “Don’t call her Mrs. or she’ll give you an F.”  I had never met anyone that went by Ms., and I really didn’t know what that meant.  I knew what a Miss was and what a Mrs. was, but Ms. conjured up visions of a woman who was too old to marry living with her 12 cats.   “You know, she’s married to Mr. Kachele but told him she didn’t want his name.”  Now I was even more intrigued.  That was an option?  You could get married and keep your own name?  “No one gets an A in her class – especially boys.”  I was darn right petrified to begin my Sophomore year English class with Ms. Tabor.

I entered Ms. Tabor’s classroom ready for the inevitable.  I just knew I would fail AP English and that I would accidentally call her Mrs.  But as the weeks passed, my fears began to fade and I was slowly captivated by a teacher unlike any I had ever had.  She stood tall – she may have even stood on her desk at some point.  Her flowing skirts, dramatic gestures and big words kept me on the edge of my seat.  She was passionate and she was smart – really smart.  And she expected us to be nothing less than brilliant.  In a year when I was caught up in my first real boyfriend, older girls that hated me and all the usual turmoil that descends upon a 16 year old, I found that for one hour of the day in Ms. Tabor’s class, my mind was quiet.  The clutter stayed in the hallway and when the door shut, I was free to learn.  It was one of the hardest classes I had ever taken, and I worked harder that year than I ever had.  I would venture to say that I knew more about English and literature at 16 than I do now in my 30’s.

But it wasn’t what Ms. Tabor taught me about English that changed my life so dramatically.  This staunchly independent woman who kept her own last name and demanded to go by Ms. planted a seed in my mind at a time when I was wrestling with my own ideals about what it meant to be a young woman.  Ms. Tabor did not set out to be the poster child for a progressive feminist, but her example steered me onto a path that I am certain led me to where I am today.

It is with a deep sense of gratitude for extending your influence to a teenage me that you deserve some pie, Ms. Tabor.