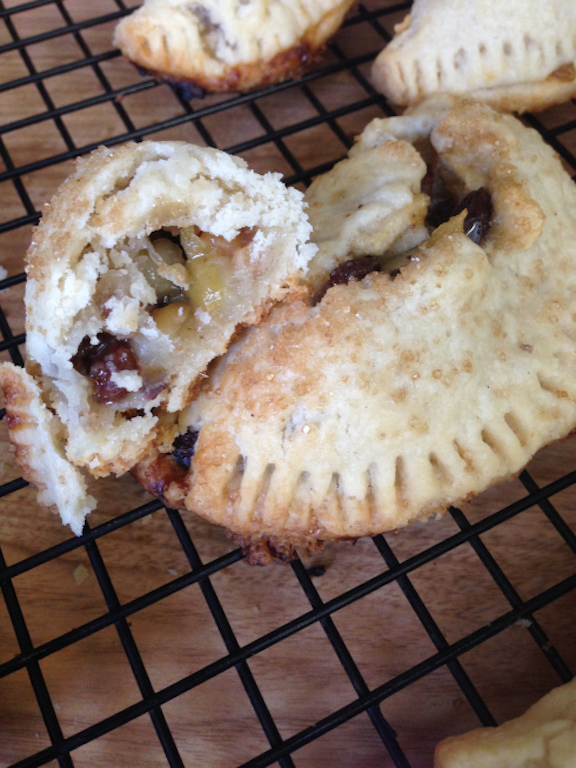 I purposely don’t spend much time scouring the internet for recipes. I feel like they hinder my creativity by planting preconceived ideas in my head. That’s kind of the way I feel about toys for my kids – we don’t have many because I’d prefer that they figure out how to play with something by using their imagination rather than be handed a toy that does the work for them. I use recipes for inspiration once I’m already on to an idea; particularly if the recipe is unusual. I let my imagination dictate what my next endeavor is going to be, and this pie was probably the most fun I have had trying to make my crazy ideas come to fruition. This is a chronology of what happens when I wake up and decide I have a fixin’ for something…

Let me start by saying, this recipe was developed with A LOT of love and A LOT of dreams of what I wanted it to be. These pies were inspired by the influences of my favorite things starting with a reader of my blog. He told me about a recipe his grandmother used to make that was a minced mixture of apples, walnuts, raisins, spices – probably a version of a type of mincemeat pie.

With the reader’s grandmother igniting my interest, I began dreaming of the desserts and ingredients I love the most – Egyptian. Words cannot adequately express how much I love desserts influenced by Middle Eastern flavors. I have a standing date with our annual Egyptian festival hosted at our friend’s Coptic church and I have come to adore the women who work for days upon days preparing what to me are some of the best desserts I have ever had. The honey, apricot and almond, the generous use of pistachios and hazelnuts, the semolina soaked in simple syrup, and the dates and raisins adorning cookies and puddings…I dream of learning Arabic and going to live by the Red Sea with every bite.

With those things in mind, I knew what I ultimately wanted – warm, cozy, but DIFFERENT. Not the predictable apple/walnut/cinnamon dance. Like a DJ who produces killer mash-ups of songs, I like to attempt mash-ups of flavors so that the product is familiar yet surprisingly different. I was gravitating towards traditional mincemeat recipes but they were a little too Christmas-like with the heavy use of spices. My attention went to an Egyptian Khoshaf sauce which is almost like a version of mincemeat but lighter on the spices (I suspect because Egypt was under British rule for quite some time up until the 50’s). But the recipe inspiration I could not shake was yet another Egyptian dessert – Om Ali, the mother of all bread puddings. For real. We’re talking puff pastry, vanilla powder, cream, hazelnuts, raisins, pistachios – something you should only have once a year, and when you do you must eat every bite with NO regrets.

After days of dreaming, I came to a pie that was just a little left of center – one that used ingredients that I felt were highly underrated and produced the warm, spicy taste I was after. Pears, hazelnuts, cider-soaked raisins, cardamom – prepare for your world to be rocked.