Reach out.  Roll balls.  That was the tag line for my New Year’s resolution in 2015. I had slipped into a terrible habit of not proactively reaching out to friends and getting the ball rolling on plans.  I was either the recipient of an invitation where I joined in the fun, or text strings would end with, “Yes!  We should definitely get together soon!” and nothing further would transpire. I have a handful of friends in my life that are so good at activating plans.  To the point that sometimes I seriously wonder if they have a calendar reminder set for one friend a week so that everyone gets attention on a semi-regular basis.

I go in fits and spurts on igniting plans with people.  It’s not for lack of interest in being social – it’s just that at times, my luke warm interest in the phone paired with my habit of getting distracted by just about everything makes it difficult for me to sit down and follow through.

I realized this a few days ago when I had lunch with a good friend who I hadn’t seen in more than a month. We used to see each other on nearly a weekly basis, but since my life got upended with our move and my new job, I haven’t been as good about reaching out. In our dynamic, my role was the organizer and the one who would make the plan and execute our hanging out. With my bandwidth a bit compromised these days, I have been rather quiet and distant.  I need gathered.

This was a concept that my boss introduced to me and I love it. Some people are the gatherers and some people need gathered. She is one who needs permanently gathered. If you want to see her, make the plan and tell her when and where to show up.  Don’t take it personally if she’s not the one having the party or reaching out and making the plans.  For me, I’m better at doing the gathering, but I’m in a temporary state of needing gathered by others. It’s like I’ve raised a white flag of surrender above my house to let people know that if they would like to see me, I need you to come gather me.  The flag will come down soon, but until then, I’m grateful to all of my friends who are barging into my life and willing to reach out and roll balls.

What I am good at is spontaneous plans!  I was talking with a friend that recently had a baby and realized I had yet to make her something.  There’s nothing I love more than making food for people, and especially making food for people who have just had babies.  A pie was needed and a good one at that.  One that deserved a top crust (some of you know I’m lazy and defer to crumble tops 95% of the time). This new little one had a name that started with “A” so I decided to build a crust by cutting out the letter A. How adorable is that??  I’m not super creative when it comes to these things, so I’m particularly proud of this.  🙂 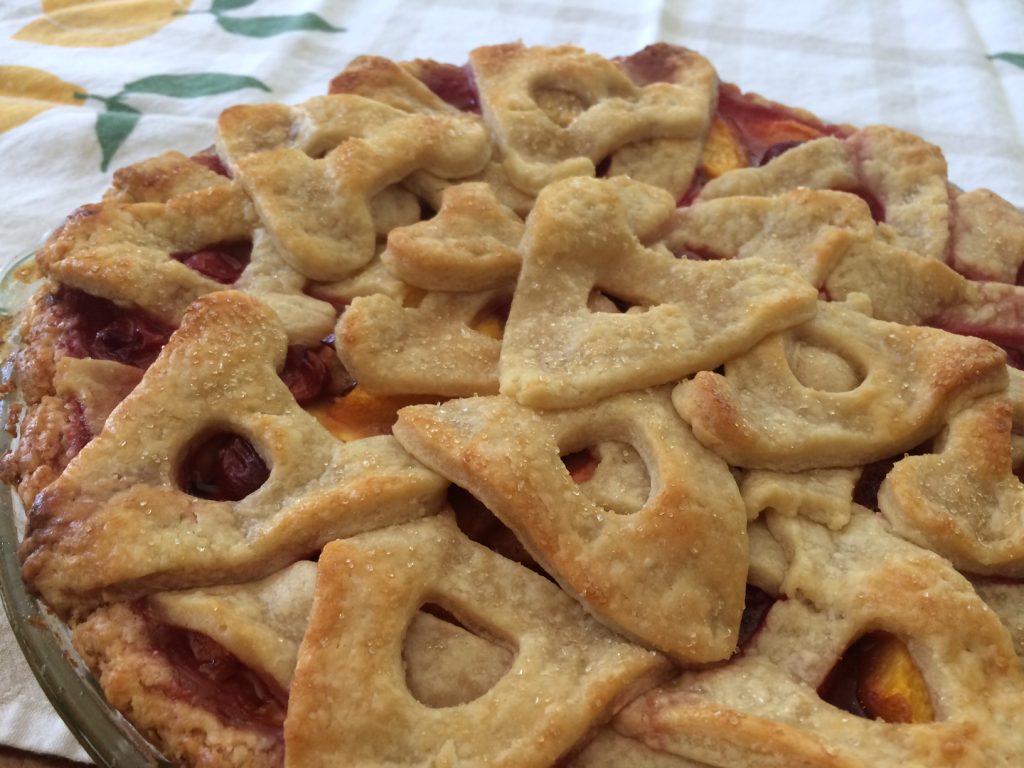 I would be doing you a disservice if I let peach season pass without telling you to make this pie combination. It’s my absolute summer favorite. I’ve posted the pie-in-a-jar recipe for this combo, but have yet to post the whole pie!  If you come upon some peaches, give this a shot!