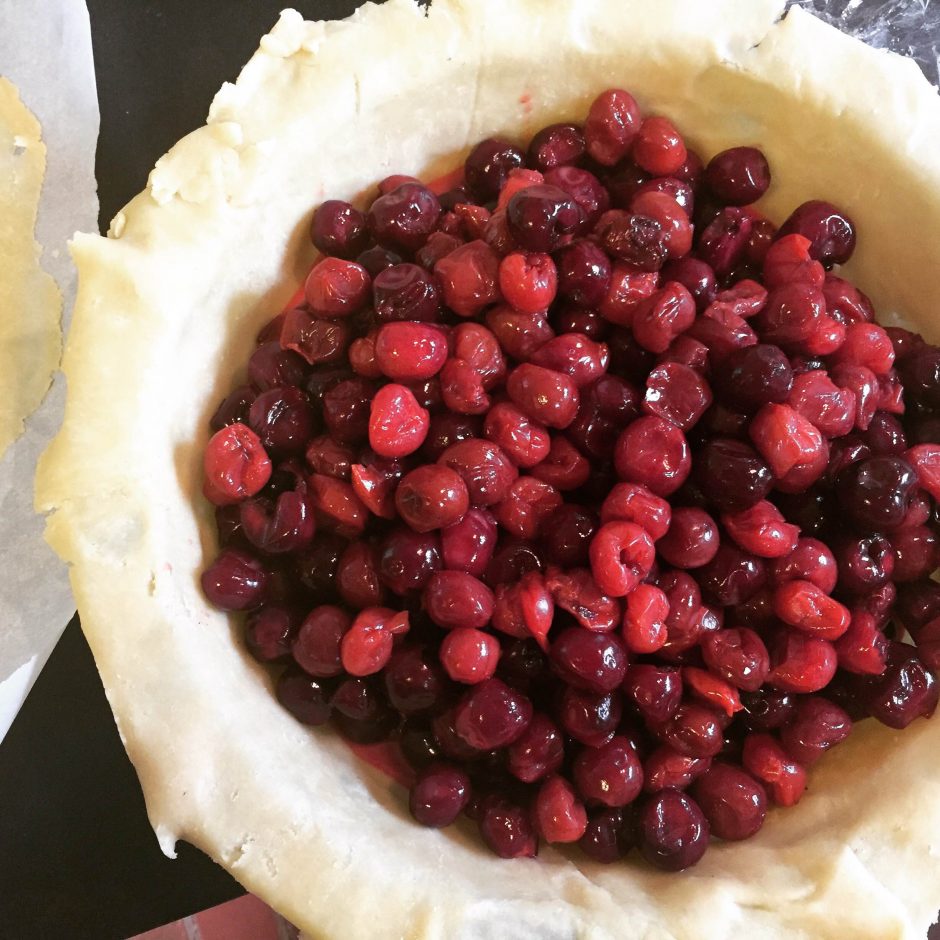 Cherry Pie is My Mom’s Pie

Sour cherry pie is my mom’s pie. Long before pie was my thing, my mom was filling the freezer with cherry pies. I didn’t even like them until well into my adulthood and don’t remember my mom making any other fruit pies. “Why can’t you make apple?” I protested.

My parents have lived in their 100-something year-old Sears catalog (no joke!) farmhouse bungalow since I was 13. We had previously lived in a townhouse with generous but communal green space when my parents bought this very simple and outdated—it didn’t have a shower or a dishwasher—house. It had a barn and a chicken coop on two acres with a creek as the western property line and was surrounded by hundreds of acres of grape farms.

I don’t remember if the fruit trees were there when we moved in or if my parents planted them along with the ambitiously large gardens we had in those early years. The peach and apple trees were never all that successful. But every year in July, the cherry tree would be heavy with tart red berries and my mom and I were charged with harvesting and pitting the juicy fruit before the birds gorged themselves.

I was a typical teen girl with wildly undulating emotions, most of which manifested as angsty resentment toward my mom. I didn’t like cherry pie and her cherry-pie-making was obviously [insert eye roll] another example of her egregious lack of regard for me; so looking back I imagine that I made the chore pretty unpleasant for my mother. I hated the bugs that the bright fragrant berries attracted, and I hated the sticky crimson juice that ran down my arms as we picked and pitted them.

My role in cherry pie making ended there. In fact, I don’t remember ever making pie with my mom. Everyone raved about her scratch pie crust, but I never bothered to learn. Her tools were a bowl and two forks…it seemed so old-fashioned. And I think the way that other people were incredulous to the fact that she made her own pie crust intimidated me from even trying. And anyway I preferred cakes and cookies.

I don’t remember making my first scratch pie dough, nor my first fruit pie, but I must have been in my mid to late twenties. By that point, I had a full blown love affair with cooking (first) and baking (second), a circle of foodie friends to match, and a cover to cover relationship with my Gourmet magazine subscription. I was passionate about trying new recipes and techniques using in-season ingredients, and my developing palate had acquired a taste for fruit pie.

Today I am older than my mom was when I was that angsty teenager and I have two daughters of my own—one periodically trying out resentment on me as she approaches middle school. And when I think about how my girls perceive my pie-baking, I realize that they probably have no idea that it is a defining characteristic of who I am. I am a person who bakes pies. Upon reflection, it wasn’t until I could appreciate this about own my mom that I too began baking pies.

My mom bakes pies. Her pie is cherry pie. I bake pies. I now love cherry pie but have my own pie. That is for another post.

This year the birds got all of my mom’s cherries, so I was on the lookout for fresh tart cherries to buy. Two weeks in a row I ordered 4 pints from my farm share, but both weeks the order was screwed up and I never had enough to bake a pie. My boyfriend’s mother called last week to tell me she had a big box of already pitted sour cherries from her friend that she didn’t know what to do with. The box wasn’t really all that big, but combined with the 2 pints that made their way into my order, it was enough to make a sour cherry pie. This is not my mom’s recipe, but is my version of her cherry pie. This is not a sweet pie. Those with a hankering for a super sweet cherry pie will want to increase the sugar significantly (3-4x). 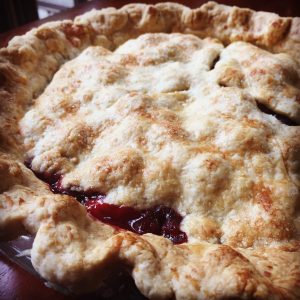