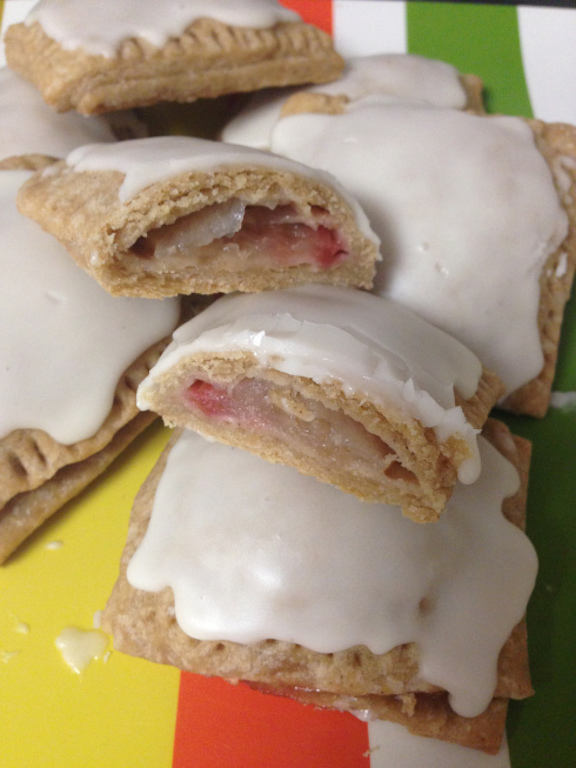 The Kind of Eyes

My son stopped me the other day and asked me why my eyes didn’t look happy.  It was a moment where I was caught in the middle of kid homework, work email, neighbor kids in the backyard fighting over the football, and no ideas of what to make for dinner. My son was standing at my side smiling up at me, and I didn’t notice.  I faked the attention and he caught me.  I was so disappointed in myself that I had become so wrapped up in the stress of the moment, I had lost the ability to genuinely return his smile. I stopped, put on my happy eyes, knelt down and hugged him.  Ever since that day, I’ve been thinking about eyes.  Weird, I know.  Like my son, I also notice eyes and I can still see the eyes of people who have had some significance in my life.  I see them so vividly and this small incident with my son made me more aware of how eyes are so indicative of our true selves.

This image is so real, I’m certain it happened and my mother can vouch for it.  When I was very young, my mother took me to the local nursing home. During the visit I crossed paths with a woman in a wheelchair sitting off by herself.  I remember stopping short as I came near her and watched as she frantically chanted “da,da,da” over and over while wringing her hands. I recall feeling petrified because I didn’t understand what was wrong, but what I remember most were her eyes. They were a glassy beautiful green and they were wild.  They were bright and animated eyes, seemingly more green against the stark white hair that framed her pale face.  I remember feeling simultaneously scared by her chanting yet mesmerized by eyes that were so alive.  I can’t help but wonder if despite the dementia, the remnants of a once vibrant woman full of life were caught in those wild eyes.

One day, my coworker and I were standing at a very busy intersection outside the hospital we work at, waiting with a crowd of patients, employees and visitors to cross the street.  To my left stood a petite, fair-skinned, older woman, holding a bag on her shoulder.  Behind her the crowd collected, including a tall, husky African-American man that looked to be in his late twenties.  Out of nowhere, we heard the expletive, “B*#@!” accompanied by a dull thud.  I turned to see the woman on the ground – the man had come up behind her and punched her on the side of the face. I assumed she was being mugged so I turned, preparing to help.  But to my surprise, she was on the ground still holding her purse.  I was so confused.  Why isn’t he taking her purse?  I looked, and there he stood, behind the crowd just watching the scene unfold.  My adrenaline took over and I ran up to him yelling, “Why did you do that?! WHY DID YOU DO THAT?!”  I was furious and as I came face to face with him, our eyes met.  He just stared at me as I yelled.  Empty. His eyes were empty.  Nothing.  He just looked at me.  Something wasn’t right.  In the days following, we had to go to court as witnesses and I found out that he was indeed mentally ill and involved in a program that housed and helped him.  He was out of his medication.  I fought back tears that day because everything was just so sad.  Those eyes – those scared, confused eyes that reacted so violently to that woman.  I still see him, staring at me as I yelled; staring past me with empty eyes.

Early in my career, I had a job where some of my time was spent supporting women in very difficult situations.  I’ll never forget the first woman I worked with. I walked into the room, introduced myself and she wouldn’t look at me.  Even as I gently asked her questions, she refused to turn her head towards me.  I stopped talking and sat in silence with her until she turned and looked up at me, revealing a black eye.  Despite her stoic demeanor, her eyes were raw with emotion and searching.  It was as if she was revealing everything I needed to know through her eyes. She was searching for something…anything.  I had to leave the room to gather my thoughts.  I made up an excuse, closed the door behind me and went to the bathroom to look in the mirror and make sure I was communicating kindness and comfort with my eyes and not the shock and discomfort I was feeling on the inside.  I went back in, held her hand and listened as she told me about her boyfriend who had been hitting her.  We actually didn’t exchange that many words.  It was her eyes – silently pleading for comfort and I so desperately wanted to know the right thing to say.  But this was a situation where there wasn’t much to say.  We communicated in virtual silence, her allowing me to hold her hand, and accepting a tissue for the one tear that escaped from her searching eyes.

Friends of our family belong to the local Coptic Orthodox Church (reference my last post and my love of Egyptian desserts!). My friend’s father is a Coptic Orthodox priest who trained under the late Pope Shenouda, III in Egypt before coming to the States to start a church.  The whole family grew up regarding Pope Shenouda as a grandfather, and through my friend, I have come to know more about Pope Shenouda than this Methodist descendant of the Daughters of the American Revolution would have ever imagined.  A while back, my friend showed me a picture of Pope Shenouda.  I grabbed his phone and enlarged the picture to see his eyes – they were so sweet, so kind.  I just looked at him, mesmerized by how a picture could still communicate such energy.  He wore kind eyes.  This man who lead his church in a country that persecuted him and his followers. This man who despite the years of persecution, encouraged dialogue and positive relations between Muslims and Christians.  This man who was sent away and put on house arrest because of his beliefs.  He wore kindness louder than any bomb that had blown apart his churches.  I want to learn from those eyes. 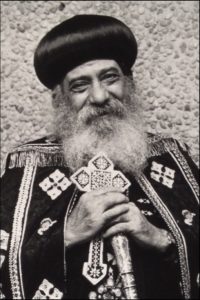 My grandfather wore kind eyes.  Most, if not nearly all, of my memories of him are related to his kind ways.  I remember being at his house once and a man came to the door.  He was the father of a girl I went to school with and I had no idea how he knew my grandfather.  He stood at the screen door and told my grandfather that he had come to ask to borrow money.  My grandfather invited him in, and from the dining room, I listened as the man told him his story and heard my grandfather agree to a loan.  I was so taken by the fact that a virtual stranger trusted my grandfather’s kindness to make such a bold move, and even more struck by the fact that my grandfather gave him money.  No judgement.  No conditions.  My grandfather helped people and gave of himself whenever he could.   During my last visit with him before he died, it bothered him so much that he had nothing to give me.  So he gave me a beer from his tiny nursing home fridge.  It was 10am, but we drank it.   Of all the things I would have wanted of my grandfather’s, I want his kind eyes. 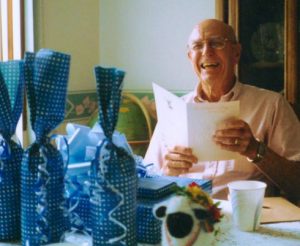 If you have some apples hanging around like we do (like, 21 pounds), make these.  I swear – this takes a much lower skill level than pie and is surprisingly simple.  I have posted this recipe before, so visit this link for the full tutorial on how to make the dough, etc.

This time, though, I used fresh thinly sliced apples instead of preserves.  AMAZING.  Seriously – do this.  You don’t even need to peel the apples.  Here’s what you do:

You will need 3 small to medium sized apples.  Slice the apples on a mandolin – I put it on the highest setting (I didn’t want super paper thin).  Toss them with 1 teaspoon lemon juice, 2 tablespoons of sugar and 1 teaspoon of cinnamon (or however much of each you would like). 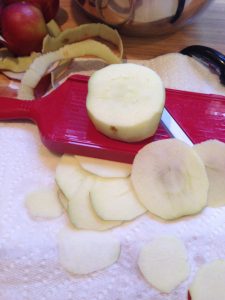 Roll out the dough (recipe in the link above), and cut squares or rectangles as large as you would like.  I did smaller squares and got 13 pop tarts.  Pile the apple slices into the square (about 1/2 inch thick) and cover with another square of dough, sealing the edges with a fork. 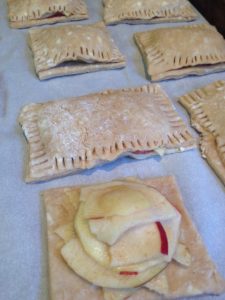 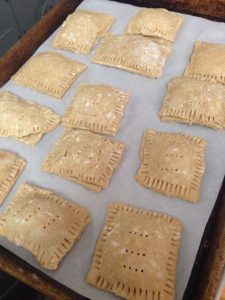 Place the pop tarts on a parchment-lined baking sheet and pierce the tops a few times with the fork to let them vent.  Bake at 375 on the middle rack for about 20-25 minutes until they start to brown.

Remove from the oven and place on a cooling rack.  When cool, prepare the vanilla glaze (in the recipe link above) and lightly glaze the pastries.  They will keep in an airtight container for two days.  They are so good!  And while not awesome for you, they are whole wheat and low sugar, so you can ignore the fat right? 🙂

Tips for freezing:  My ideal method is to freeze them before they are baked.  Line them on a baking sheet and place in freezer.  Then, put the frozen pop tarts in a freezer bag with wax or parchment paper in between layers. Bake from frozen in an oven or a toaster oven for smaller quantities.  You can also freeze these after they are baked and simply bring them to room temperature.  Once they are at room temperature, you can crisp them up in the toaster oven if you want.