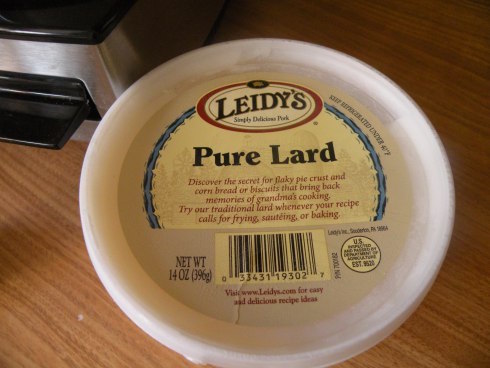 I had to do it.  It was the natural next step.  It was time to make pie crust with LARD.  For some reason, I was having a hard time making the leap.  It’s the word – lard.  The first thing that comes to mind is the Lard A$$ pie eating contest in the movie Stand By Me.  Lard and pie together in a hard to watch ending.  But I’m ready to reclaim the word and find out if I will join the ranks of those singing its praises. 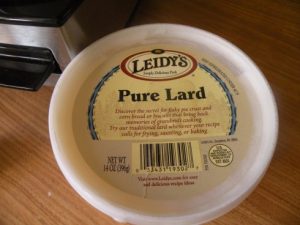 On a tip from my Mother-in-Law, I found non-hydrogenated pure lard at our local Heinen’s grocery store.  Right there next to pork bones and other non-identifiable pork products was a shiny white tub marked “Pure Lard.”  I almost made a mistake and bought beef suet, but I remembered that all the articles reference Leaf Lard from pigs.  Good thing I didn’t – the beef suet was like a hunk of fat and the pork lard is creamy.

I was carrying the tub to the front with my fingertips – like it was going to seep through the plastic.  Then I felt the need to chit chat about why I was buying lard to the 16 year old cashier who humored me and confirmed that it was “gross.”  But it was at that moment that my heart started to embrace this little tub of fat – it rang up $.99!  WOW!  A 14 ounce tub of Lard for $.99 and a 20 ounce package of Crisco costs nearly $4.50.  This could be the beginning of a beautiful pie partnership.

The best way to determine if this was indeed the magic ingredient was to do a blind taste test.  So, I made two recipes of dough – one with butter and lard and my usual butter/shortening recipe.  But here’s where I went wrong – I decided to mess with my go-to pie crust recipe and alter the butter to shortening ratio.  I noticed that in most pie dough recipes, the total ounces of fat no matter what the combination is about 4 ounces.  The recipe I have been using (with much success I might add) is about 5.5 ounces of total fat.  So, I used an all-lard crust recipe from The Pie and Pastry Bible and adjusted it to be part butter and part lard.  Then I made my usual Best of Both Worlds dough but scaled back the butter and shortening to 5 Tablespoons each.

I thought I was heading for greatness.  The lard dough was so easy to work with!  It rolled beautifully and didn’t need nearly as much flour on the counter.  The one with shortening seemed about the same.  I made my usual round mini-pies in cherry, pumpkin and chocolate pudding.  To my dismay, they were less than exciting.  While they were edible, both recipes tasted more like my first attempts – a step back in my pie endeavors.  The bottoms were a little tough and the flakiness was just not the same.  My takeaway:  more fat = better pie.

As if that wasn’t enough, I was determined to conquer a lard crust.  So, I made another one.  This time I did my usual 6T of butter and did an equivalent amount of lard – 1/4 cup and another 1/8 cup.  I was careful to try and not over process the dough.  The lard seems very delicate and it’s easy to make it too fine and not leave enough chunks in the flour mixture.  I was totally bored with the round mini-pies, so I tried making little pie babies in a mini muffin tin. 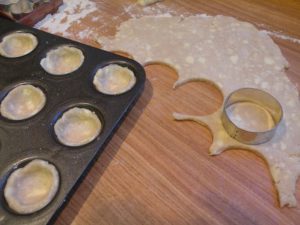 I made a fresh apple filling (pre-cooked) and cut 2 inch circles out of the dough.  I placed each circle into the muffin tin and then refrigerated it for 5 minutes to set.

I filled each little pie to the top with filling and covered it with an oatmeal crumb topping (the same one from the recipe I posted a while back).  Then I baked them for 15 minutes in a 400 degree oven.  I removed them from the tin right away and placed on a cooling rack. 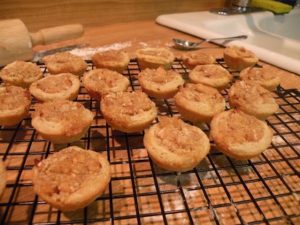 I don’t get it – I must be missing something about how to handle a lard crust.  These were definitely better than the first batch, but not nearly as flaky as I had hoped.  I must admit, I like the taste of the crust better.  After having a crust made with shortening and then crust with lard right after, I noticed that the shortening one leaves a faint aftertaste and the lard one does not.

So where do I go from here?  To bed.  I’m tired.  I made pie 5 times this weekend and have had my fill.  My goal is to not eat any more pie until next weekend and spend this week detoxing from all of this fat taste testing.  I had hoped that the L word would turn into Love by the end of this weekend, but I’m still undecided about the future that lard has in my pie life.  I’m not ready to give up, so I’ll go back to the drawing board next weekend!