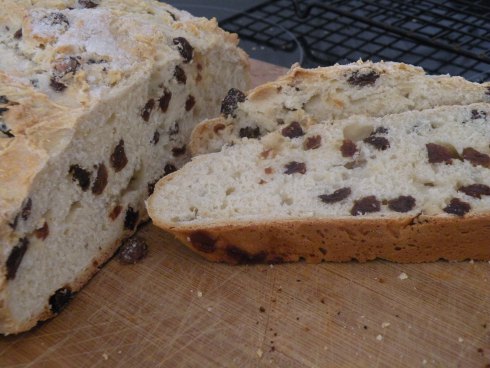 Let’s just cut to the chase here.  I made Irish soda bread and it was just as good (dare I say better?) than my Mother-in-Law’s.  There, I said it!  For years I have swooned over her Irish soda bread and resolved that I could never make anything to compare.  But this girl was destined for a win and the luck of the Irish was with me.

I took my own advice and read the recipe before removing even just one measuring cup from the drawer.  Boy do I love these bread recipes – four ingredients with optional raisins.  I was eager to conquer this challenge and take my soda bread to the family St. Patrick’s Day gathering.

The recipe in Baking With Julia is a traditional soda bread.  Nothing fancy, no eggs, no sifting – just flour, salt, baking soda and buttermilk.  I blended the dry ingredients together with a fork as directed.  Then, reading carefully along, I added the buttermilk and stirred until the dough came together and then folded in a cup of raisins.  Easy enough.

The next step was to knead the dough on a lightly floured surface for just about a minute.  The recipe says that the dough will be “soft and malleable…” but I did not expect a sticky, gooey mess.  I even looked malleable up in the dictionary and it means capable of being shaped or formed. Um, no.  It felt like I had enough dough between my fingers to make another soda bread!

Attempting to tame the dough as best I could, I plopped it on the prepared baking sheet and tried to cut a crisscross as directed.   There was no making any kind of crisscross in this dough. It just popped right back into it’s sticky form.

I took the bread out of the oven about 6 minutes before it was set to be done.  It looked golden brown and I wanted to err on the side of caution.  What emerged was a beautiful round of Irish soda bread despite my sticky hands and failed crisscross.  It tasted great and had a perfectly balanced texture – not too soft and not too dense.  And best of all, it tasted just as good as my Irish Mother-in-Law’s. 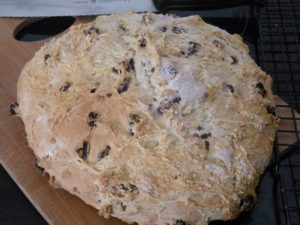 Be sure to check out our hosts this week for the recipe at My Culinary Mission and Chocolate Moosey!