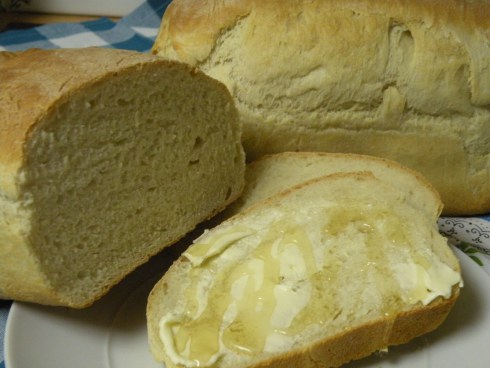 Tuesday is such a bummer of a day.  It does not have the cache that Monday has.  Manic Monday.  Oh, looks like he has a case of the Mondays.  I’ll start on Monday.  Hop on Facebook on Sunday night and see how many posts mention Monday.

Wednesday has the unfortunate status of hump day, so that right there will allow it to live in infamy forever.  Thursday is the warm-up for the weekend and Friday is the golden child.  TGIF, baby.  Saturday and Sunday are awesome because for many of us, we don’t have to work, and they are filled with the promise of getting everything done you’ve been trying unsuccessfully to accomplish all week.

What does poor Tuesday have to offer?  Tuesdays With Dorie!

In 2008, a woman who received Baking From My Home to Yours by Dorie Greenspan (ahem, my FAVORITE cookbook.  Ever.) for Christmas, embarked on a resolution to bake one recipe a week and invited other bloggers to join her.  Their project was called Tuesdays With Dorie because they would post their recipes on Tuesdays.  The clan was a closed group, so I have pined on the sidelines to play along ever since I found out about them.

Fast forward to last month on a car ride between work meetings.  I was listening to NPR and to my amazement, Dorie Greenspan was the guest on Talk of the Nation.  As I was desperately trying to call in to tell her how much I adore her cookbooks, she mentioned that the Tuesdays With Dorie group had completed the book (four years!) and was opening the group again in preparation for their new book, Baking With Julia by none other than Dorie Greenspan.  I was overcome with excitement and could not believe my good fortune to catch this interview.  I raced back to work and promptly did what any good employee would do; jumped on the internet and sent an email asking to join immediately!

So, I’m in!  Two Tuesdays a month I will be posting my attempt at the assigned recipe from Baking With Julia with the hopes of completing the entire book.  You should plan to be my friend in about two years because by then, I should be a darn good baker!  But no worries, the pie obsession continues – just not on Tuesday.

For the recipe, click here to go to the blog hosting the recipe this week.

As much as I love to bake, I have not dabbled in bread.  That’s my husband’s territory.  In fact, I’m pretty sure these white loaves are my first official attempt at bread.

Of course, I’m reverting back to my college days with the recipe due on Tuesday and I’m up late baking on Monday night.  Some habits die hard.  What a relief to find how simple bread is – six ingredients!  Flour, salt, yeast, sugar, water and butter.  Why am I buying bread at the store?  While making this bread, I was channeling my friend Heather who has embarked on a February Bread Challenge – her version of Pie it Forward – and is reflecting on her experiences through her blog, Abundance Measures. She makes more bread than I make pie, so I figured I could uphold the February bread challenge with my two white loaves.  I’ll eat one and give one away!

It was full steam ahead and things were going great until I was ready for the bread hook.  To my dismay, the bread hook for my stand mixer was too long for the bowl – I had the wrong one!  I think my mother-in-law has mine.  The hook was too long to even lock the mixer into place.  But nothing was going to stand in the way of my first Tuesdays With Dorie post.  I started that unsecured mixer and bread hooked my little heat out.  Truth be told, about two minutes into the 10 minutes it needed to mix, I had to assume a football stance and hold the top of the mixer steady so it would not fling dough out at me. Nothing like eight minutes of taming a wild Kitchenaid mixer.  But I prevailed and the dough was ready for the first rise.

45 minutes later, I cut the dough in half and proceeded to shape the 12 x 9 inch rectangles as instructed.  The first one was a breeze, but I did whip out my measuring tape to be sure I was on target.

The second one wanted nothing to do with forming into a rectangle.  I kid you not, that ball of dough kept bouncing back into a heart!

I patted, I stretched, I nearly laid myself across it.  Finally, it came into a shape that was close enough.  I folded the dough as instructed, pinched the seam closed and placed them into their pans to rise for another 45 minutes.

After they had double in size, it was off to the oven to bake until they were golden brown.  The recipe says to stick a thermometer through the bottom to be sure that the internal temperature is 200 – a good tip for avoiding over or underdone bread.  I only had a meat thermometer but I figured if it could make my turkey moist, it could certainly safeguard my bread from over baking.

And then the moment of truth.  They looked beautiful as they baked in the oven and I only hoped that they tasted as good after the shenanigans I pulled trying to stretch one into a rectangle. I followed the tip in the book and took them out of their pans and returned them to the oven for the last five minutes for even browning.  Perfection!  This bread was so good that I went upstairs at 11pm, woke my husband up and made him eat some.  Breakfast on Tuesday will be something to look forward to! 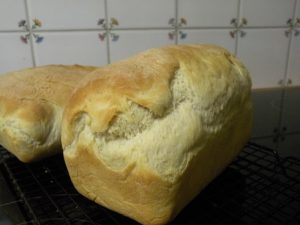