“I could never make crust.” That is the #1 reason people give for not making pie. The prepping, making filling and the baking all pale in comparison to how worried people are about making crust. No judgment here – I totally get it. Crust was the bane of my existence for easily the first six months of my year of pie. I poured over books, scoured the internet, and ate more chewy crust than most people do in a lifetime.

I’ve found crust to be more forgiving than most cookbooks make it out to be if you stick to some simple intuitive guidelines. So here is my best shot at giving you some blog-induced courage to go make yourself some crust this Thanksgiving.  You can find my recipe on the main page where it says “crust recipes” or click here.

Before you even think about diving in, make sure you have what you need:

If you want crust-making to be as low stress as possible, prep your butter and shortening days or even just hours before you want to actually make the crust. For some reason, making crust seems much less complicated when I do this. Cut it up into small pieces, put it in a Ziploc bag or wrap in plastic wrap and throw it in the freezer.

I make packets of these so they are ready when I am. 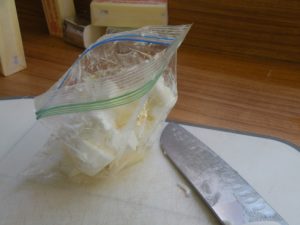 Let me impart a little wisdom – you have the force, young pie-maker. The process of making crust takes mere minutes, but there can be so much angst wrapped up into those brief moments. If you pay attention to a few nuances of the dance, you’ll be ok. Here is a break down of EXACTLY how to do this (for one recipe of dough for two 9-inch pie crusts): 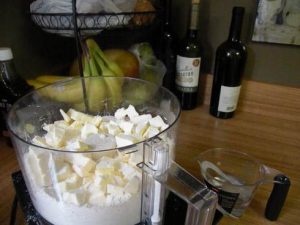 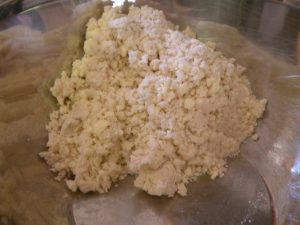 This is where the best crust can get annihilated. Over-rolling, re-rolling or just super enthusiastic rolling can knock you down a few notches in the perfect crust category. Let the crust sit a room temperature for a few minutes. Roll the crust right away; it will crack. Roll it after it sits too long; it will stick. You can’t win. So, let it warm up just a tad before you start attempting to roll your beautiful 12-inch circle. 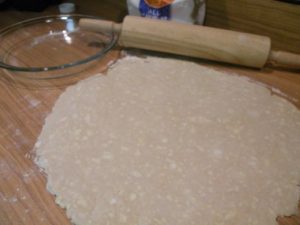 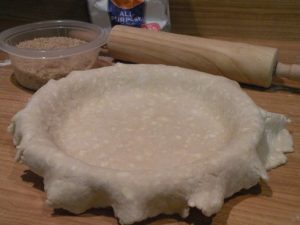 Refrigerate your lined pie plate for at least 15 minutes before filling and baking. You can also cover it and leave in in the refrigerator for a day.

See, that’s totally doable.  I promise, a homemade crust could be what’s standing in your way of a good pie and an OMG-give-me-your-recipe pie.  Now, go out and get your crust on this Thanksgiving!

One thought on "Crust or bust: A ridiculously detailed tutorial for those who are scared to make crust"