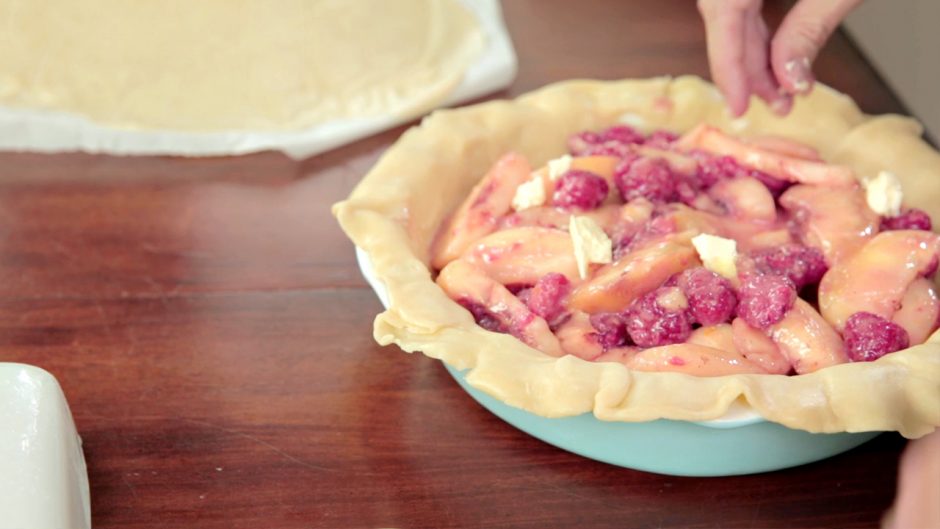 My pie crust recipe has remained unchanged since forgoing shortening several years ago, so I think of my pie-making as unchanged. Sagi (my fiancé and the man behind all things tech at Pie Eyed) found and edited a pie video that we shot last year revealing that growth (or at the very least change) is inevitable. I was surprised to see how much has changed (Did I really use flour as my thickener? I didn’t whisk together my dry ingredients before adding them to the fruit?), and especially excited to be reminded of a dough hack that I used for most of my pie-making history.

Like many cooking hacks, this one depends on parchment (waxed or unwaxed) paper.

Rolling out the dough is the step that leaves most novice pie makers (and even more practiced ones) feeling intimidated. We know overworking the dough will build up too much gluten resulting in a tough crust. We use flour to prevent sticking on the rolling pin and work surface, but not so much that the dough cracks or crumbles. We need to work quickly to keep the dough (especially the butter) cold. The pressure to get it right can be a bit overwhelming.

For my first bunch of pie-making years, I would roll out my pie crust dough between two sheets of parchment paper cut larger than the desired dough round. This allows for a completely non-stick experience without adding flour. It’s also easier to judge thickness and get an even roll. You still want to move quickly so that the dough stays cold, but you’ll find that it is so much easier to move quickly than with a floured surface.