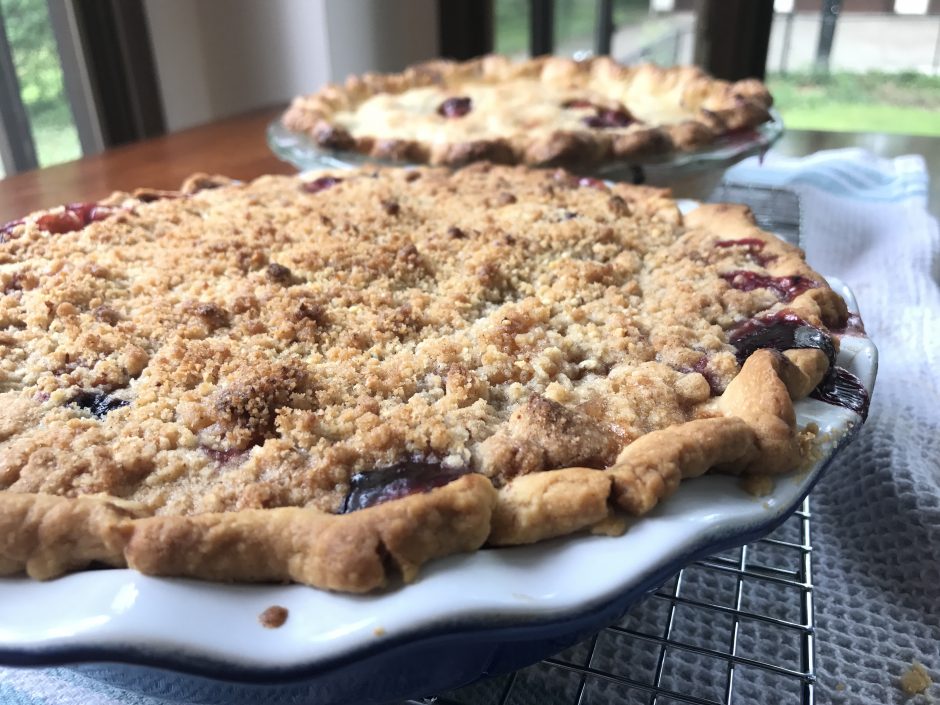 If the sweetest bit of surrender is inherent in pie baking, Sunday’s peach pie required downright capitulation. My plan was to make a lattice crust peach pie. I’m a huge fan of multi-fruit pies (or mashups as Emily calls them), but am so thrilled with the new bounty of local peaches in my Fresh Fork Market bag (CSA) this week that I planned to highlight this gorgeous seasonal stone fruit all on its own.

Let me set the stage for you. It was a Sunday in July, and my kitchen climate was about 80 degrees with 80% humidity. Our lovely home was built in 1920 and we haven’t made the nice-new-car-sized-investment that central air would require in a heated-by-radiators house without ductwork.  Emily and I had just finished filming our instructional videos for our respective pie crust recipes. The filming was a total blast and hopefully successful, the dough however was less than stellar from all of the humidity in the air and the heat of the season and the bright studio lights. I managed a little magic on the crusts resulting from our filming such that the double crust cherry pie I attempted came out beautifully with a little patience and lot of patchwork.

While rearranging the fridge to make room for filming supplies, I discovered two additional disks of pie dough hiding behind the cauliflower. Five days earlier I attempted to use 15 pounds of sour cherries I had ordered, apparently made dough for six crusts, but only succeeded in making four sour cherry almond crumble pies. Not sure if the disks of dough had held up after 5 days in the fridge, I gave them a shot. I rolled out one of the disks and it wasn’t going to be lovely. There was so much moisture in the dough that it was sticking to the generously floured counter and rolling pin, and tore when I tried to lift it into my pie plate. I gently wrestled it into place before nestling it in the refrigerator to chill while I worked on the filling.

Seven or eight peaches looked like the right amount to fill a pie, so I began the process of scoring, simmering and submerging them in an ice bath before peeling. (Actually, I forgot to score them, but their peels slid off in spite of this lapse.) The variegated flesh of the peeled peaches was a gorgeous blend of yellow and red. 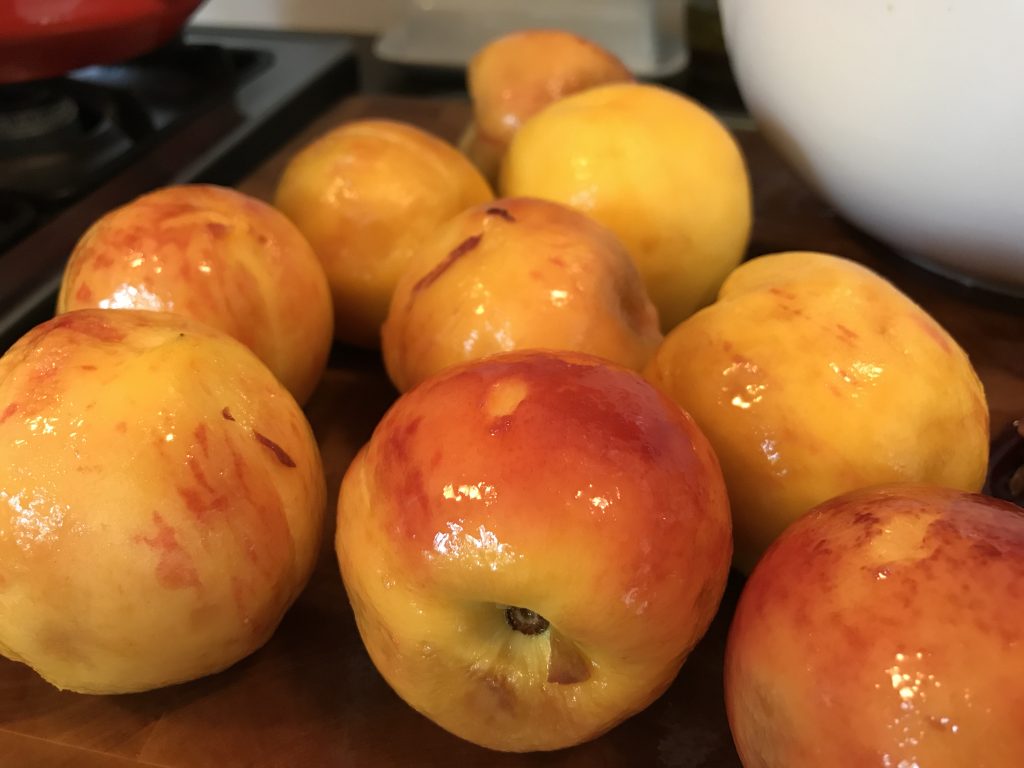 Unfortunately after pitting and rough chopping these beauties, however, it became clear they would not fill the shell and I had no intention of starting the peeling process for a few more peaches. Not to worry, I threw in about a pint of plump blueberries also from this week’s Fresh Forks share and continued developing my filling. I used the typical fruit pie ingredients including lemon zest and juice, sugar, vanilla extract (I glanced for just a second at the almond extract and really wish I’d gone with my gut given where this pie took me, but vanilla it was), and then cornstarch, cinnamon, a bit of cardamom, and salt combined. I poured the filling in the shell and it still looked light, so I sprinkled a pint of raspberries and spread them around. No problem. Until it was time to make the lattice.

The second disk of pie dough was even more finicky than the first (or the baker had become less patient…hard to say). The dough was sticky and fell apart when I tried to roll it out. I balled it up and tried again (guaranteeing the result would be tough and not super delicious), but it fell apart again and I threw it in the trash. I’ve only done this one other time in my 17ish years of pie-making, so the situation was desperate. There was really nothing to do at this point but make a crumble topping and as I pondered the direction I would take that recipe I remembered that I had saved enough almond crumble topping from Tuesday’s cherry pie marathon for at least one more pie. It was meant to be!

Pie making is imperfect. You can influence the outcome, but you cannot control it. Enjoy the ride and let the recipe unfold before you. I certainly doubt I would have intentionally developed a peach berry almond crumble pie, but I’m grateful for the beautiful result of practicing surrender.